These two little oddities come from a great NPR blog called Krulwich Wonders.  The author and radio host is better recognized as one half of the team, along with Jad Abumrad, responsible for the always enthralling WNYC show and podcast series called Radiolab.  A good while ago, I lumped Radiolab in with a few other podcasts I still enjoy when I can (mostly while walking the poochie), so check those out here.

In the meantime, enjoy this optical illusion from Krulwich's cool post on visual trickery -- "This Can't Be Happening" -- followed by a hypnotizing video from some clever geeks at Harvard.

Here are Krulwich's directions for this first image:


Below, you will see two circles composed of parallelograms. There's a dot in the middle of the image. Focus on the dot. Move your head in, then move it out. 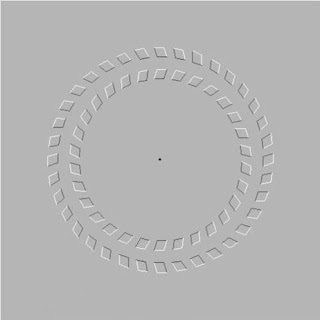