With compositions that traverse centuries, Revien is a new trio including members of the Georgia Guitar Quartet, Maps and Transit, and the Odd Trio.  While remaining rooted in classical refinement, their original take on chamber music defies expectations and branches out into contemporary, even pop territory, to exquisite effect. 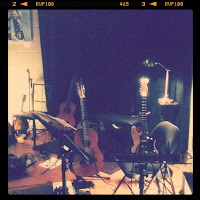 July 16th at Hendershot's Coffee Bar was Revien's "maiden voyage" and it did, indeed, feel like a return to past loves with renewed enthusiasm via compositions by DeBussy, Bach, de Falla, as well as fresh takes on Radiohead, Grizzly Bear, Led Zepplin, and Neko Case.  Originals by guitarists Brian Smith (GGQ, Odd Trio) and Kyle Dawkins (GGQ, Maps and Transit) round out the group's expansive repertoire, a bohemian stew that's bound to come to a boil as more live shows ensue.  Phil Snyder's (GGQ) alternatingly fibrous yet delicate cello ties together the trio's guitar, mandolin, and effects-laden tangents.  It is, in part, Snyder's return to his first instrument, his first musical passion, that gives the new group its name, derived from the French "to return" or "to come back".

The three close-knit musicians have honed their musical connection over years touring with the Georgia Guitar Quartet. Still, there's a freshness to the approach.  They took liberties with folk pop, like their ethereal version of Grizzly Bear's "Foreground", and reallocated bluesy, bluegrass syncopation to the classic rock of Led Zepplin's "Bron-Y-Aur Stomp"; I'd reckon most in the capacity crowd had never seen Smith wielding a slide over nylon strings, and the result was oddly down-home.  Near the close of the first set was Dawkins' "Ants in a Shell", a Maps and Transit piece commissioned as part of Brian Smith's Spring 2011 suite entitled "Daedalus", incorporating brilliant, understated electronic effects and a charming, Eastern-sounding mandolin technique using a drumstick. ﻿﻿﻿
﻿﻿
﻿Beyond the reinvented modern covers, Snyder captivated to start the second set with two Bach solos ("Sarabande", "Courante") featuring his dexterity and sensitivity.  Another gorgeous cello solo, "Standing by the Icarian Sea", was also from Smith's "Daedalus" show at Canopy Studio in Athens.  The cellist remarked that Smith's composition was good fun to play--and equally challenging--which was evident as the pony-tailed Snyder smiled lightly amidst heavy concentration.  Neko Case's "Vengeance is Sleeping" was a standout arrangement that had an effortless, floating sound like slicing through the first watermelon of summer, knowing life's fleeting sweetness as string textures built up in delicate strata.

Once Smith and Dawkins rejoined their "vocalist", as the group thinks of Snyder's lyrical cello phrasing, the second set unfurled easily with a warm rendition of Radiohead's "Weird Fishes", a deftly arranged Simon & Garfunkel tune, and more classical obscurities from Debussy and contemporary cellist David Popper.  The trio's rendition of Manuel de Falla's "La Vie Breve" was a triumphant finale, a harbinger of many stellar performances to come.
Revien ~ the official site; tumble on over so you don't miss out next time!
More Athens music ~ Georgia Guitar Quartet, Maps and Transit, Odd Trio
Posted by a.f.c.tank at 7:06 AM