Warning: This is the start of a diatribe, and I'm even going to criticize...the President! No, I'm not a right-wing nutcase, and no, I'm not a bleeding heart liberal (or what Libertarian radio nut Neal Boortz would call a "bed-wetting Liberal"). I'm simply someone with an opinion, and this is my forum, so here we go!
Close on the heels of a disastrous coal mine accident in West Virginia, the Gulf of Mexico is now becoming a vast oil slick thanks to our pals at British Petroleum. The spill -- which is still emanating from the well-head deep in the Gulf -- is the result of a massive explosion that cost several employees their lives. Just as in the case of the coal mine in West Virginia, the loyal workers were after energy to be harvested for our consumption. 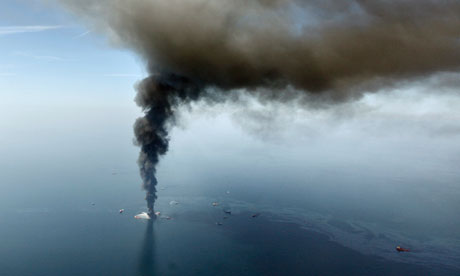 photo courtesy of The Guardian

Very recently our fine President attended a memorial service in the mourning coal-mining region of Raleigh County, West Virginia to pay his respects for the lives lost in the mine shaft collapse at the Upper Big Branch Mine owned by the Massey Energy Company. Commentators emphasized that mining for high quality coal in extremely deep mines is highly dangerous and the companies (and presumably the employees doing the real work) understand the heightened degree of risk. Pockets of volatile methane gas, as were thought to be the deadly culprit in this incident, can turn a typical underground workday into tragedy for miners, several of whom have gone on record saying that they would never recommend mining as a profession to their children.

I don't recall the timing, but President Obama's announcement that a widened area in the Gulf would be opened to offshore drilling, such as BP's debilitated Deepwater Horizon outfit, could not have been more insensitive considering the freshness of the WV accident. Instead of admitting the potential dangers of continuing on a path of home-harvested fossil fuel consumption, Obama in essence has given Big Oil a free pass to do as it will in our coastal vicinity. No, we may not ever see the drilling platforms because they'll be situated more than 125 miles from any Gulf coastline, but that does not make the inherent threat of man-made disaster any less frightening.

So, as BP's busted Deepwater Horizon well continues to gush black gold, at a depth of 5,000 feet below the Gulf's now slick surface, executives have admitted that the "containment dome" technology they're employing may or may not even work to minimize what may eventually be recognized as the most severe environmental disaster of this century thus far. Take a look at these Nature Conservancy photos of the Gulf Coast because chances are we won't see this kind of pristine coastal wetland habitat for a very, very long while.

Even though it is a desperate environmental situation on a grand scale, there are ways to help. There are individuals and groups (including BP, of course) doing the arduous work of cleaning up the spill, but they embark on a years-long struggle.

Now I wonder, is this what President Obama had in mind when he approved the expansion of the drilling zone in the Gulf? If this isn't a clear enough omen, then a more dire warning will never come. The eased "Drill, baby, drill!" restrictions are exactly what Obama opposed in his Presidential campaign, and his propensity toward compromise, while admirable and effective at times, in this case has proven him a fool in eco-political terms. Where is the "green energy" sector he spoke about so enthusiastically for all those heady months? Was all that simply rhetoric -- just one big "read my lips" ploy? I hope not.

Listen up: I'll venture to say that the majority of Americans don't want sullied coasts, unswimmable seas, dead wildlife, dead workers, nor do we want impervious, ungovernable corporations profit-making in our waters without regard for the safety of the American citizenry or our delicate North American ecosystems.

Check out the progress of the clean-up effort and the extent of the environmental damage with these Coast Guard updates.

Hopefully, this Gulf coast oyster reef restoration work by The Nature Conservancy was not in vain.