The fact that I'm even following up on the earlier post about the Gulf oil spill is worst of all. The hope was that the gushing, collosal engineering mistakes 5,000 ft below the shimmering Gulf's surface would have been capped by now. It is simply flabbergasting that BP and its host of collaborators have yet to stop or even slow the flow of oil and natural gas in the Gulf of Mexico. There is hardly an upside to this epic environmental disaster, but one is there nonetheless.

There was "top hat", then little "top hat", then the "junk shot" and the "mud shot" and of course, the "muddy junk shot"; however, the most important word I've heard bandied about is this: moratorium. Halting deepwater drilling projects and taking time to investigate the Murphy's law circumstances that led to the deadly Deepwater Horizon explosion are prudent (gladly taking that word back from a previous administration) steps at this critical juncture (reclaiming that one, too!). In the meantime, President B.H.O. should gather up his favorite back-pocket legislators, grab Dr. Steven Chu and get crackin' on renewable energy options and green-jobs creation--these were some decent sized planks in the platform, remember?

If the deaths of those Transocean employees could do any good, it will be in forcing the Obama administration, the Interior Department, and fossil fuel interests to go about their business in a safer more considerate way. No longer will the surgeon slice and dice without thinking about sewing Mother Earth back up again. If these companies can't prove their effective contingency planning, then they plain aren't invited into the operating theater! No swim daiper? Then, sorry, baby can't come into the pool; uh, BP, now we know you're not wearing your swim daiper. 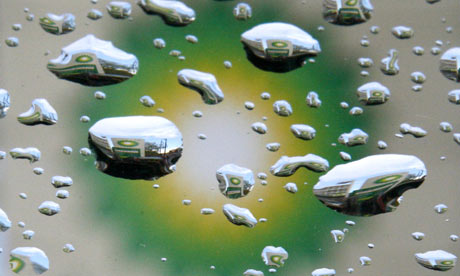 photo courtesy of The Guardian

Jon Stewart (a.k.a. Stewbeef) runs down the clean-up debacle in a hilarious segment from The Daily Show, May 13, 2010, especially enjoyable due to its clever jabs at the always piss-poor Detroit Lions and astute recognition of Mayan endtimes indicators. Enjoy!
Posted by a.f.c.tank at 12:50 PM