According to the Maps and Transit site, "Kyle Dawkins has released two solo recordings under his own name, Conasauga (2002) and Walls became the world.(2004) and is a member of acclaimed chamber ensemble The Georgia Guitar Quartet. He lives and works in Athens, Georgia."

Collaborator and wife Julie Phillips is "a trapeze and aerial silks instructor at Canopy Studio and is a member of their acclaimed repertory company. She is also a bassist, percussionist, and writer."

The following is an email interview with Kyle Dawkins conducted in late 2010 after the release of the Maps and Transit project Songs for Divining in September, 2010.

AT: The instrumentation on the album is so unique and was dubbed "folktronica" at some point. How much of the sound is guided by the instruments themselves, or is it the sound in your mind's ear (so to speak) that dictates those choices? Can you recall any "happy accidents" as far as combining instruments to achieve a brand new quality of sound? Which instruments might be on your "dream list" regardless of cost -- is there a sound you're chasing that you could harness with a little help from Bill Gates?

KD: Many of the "happy accidents" happened as a result of the unpredictability of the stringed instruments that I was using. I've got some old mandolins and other stuff that have these really idiosyncratic, messed-up tones as a result of warped necks, frets, etc. I thought it gave the songs a sort of creaky, homemade feel. I love the sound of really antiquated or broken-down acoustic instruments. You can get sounds out them that you couldn't get otherwise if it was a new instrument off the shelf somewhere. Lately, I've been really into mellotrons. I love the often out-of-tune, fluctuating tape loops and it's spooky sort of canned sound. I used a bunch of "virtual" mellotrons from different sound applications on my computer but it's really hard to approximate the sound of a real one which I've yet to even try out. So yeah, I'd like a mellotron from Santa or Bill Gates.

AT: I'm sure this varies greatly, but how long does it take you to create a song in this way, with all the layers and pieces? Also, do you give express consideration, as you work out a new track, to how it might be performed live?

KD: I'll usually write the songs and then Julie and I will listen to it and figure out ways to juggle the parts using a combination of samplers. Usually the parts that would be interesting to see played live are the ones we rehearse and the more textural sounds we farm in using the samplers. The sampler parts are usually the ones that are more computer-based and aren't necessarily playable on guitars or mandolins or whatever. Usually a song will take me a day or two to write and a couple more days of Julie and I rehearsing and listening. Some songs seem to take forever though for whatever reason. Lately, we've been in the process of planning more collaborative song writing processes where we build the songs up as a duo instead of a composition that was written on a computer and figured out later as a band performance.

AT: Besides Applachia, which other regions of the world seem to contribute to these compositions. Is the Celtic tradition something you look to or particularly enjoy outside of writing and performing?

KD: I sometimes draw a lot from Asian and mid-Eastern folk instruments and melodies, some Sufi, and Indonesian music too. The Celtic influence is there mostly as a point of reference for certain melodies. 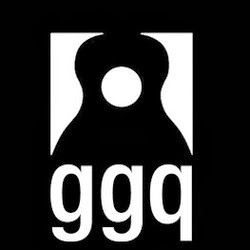 AT: You both are into fine art and design (and you've collaborated with painter Chris Wyrick in the past), so if you were to assign a color scheme to this album, what would it be? To put it another way, what is the "look" of your sound?

KD: I wanted some parts of the album to have a murky, underwater, brambles-and-vines-everywhere kind of texture combined with the feeling of hearing music from the inside of a dusty music box. Those aren't colors exactly but they're places. I don't usually get a sense of color when I'm writing music as much as a sense of texture or place.

AT: As I listen to your album, I see so many images in my mind, and I know that response is individual to the listener. Have you ever been approached by filmakers who want to use your music as a soundtrack to a "talkie" ?

KD: I haven't done any soundtracks but it's something I've always wanted to do. Filmmaker anyone? Email me at kyledawkins75@gmail.com 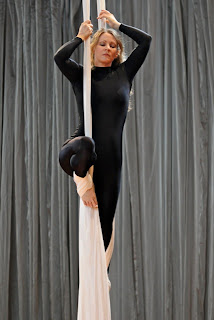 AT: Along those same lines, it would be amazing to see some of your aerial artistry set to this music (and I have live at Canopy Studios!). Have you considered making a music video incorporating your other artistic endeavours?

KD: We've been in conversation about doing something like this with different people around town so yeah, hopefully something will be in the cards soon.

The Canopy Studio performance will feature aerial artistry on trapeze and silks with accompanying compositions by Brian Smith (Georgia Guitar Quartet) with Dawkins on guitar, among many other talented musicians.  It's bound to be an enchanting, memorable event that shouldn't be missed.  If you can be in Athens, GA, score some tickets!

Two shows plus an open house prior: