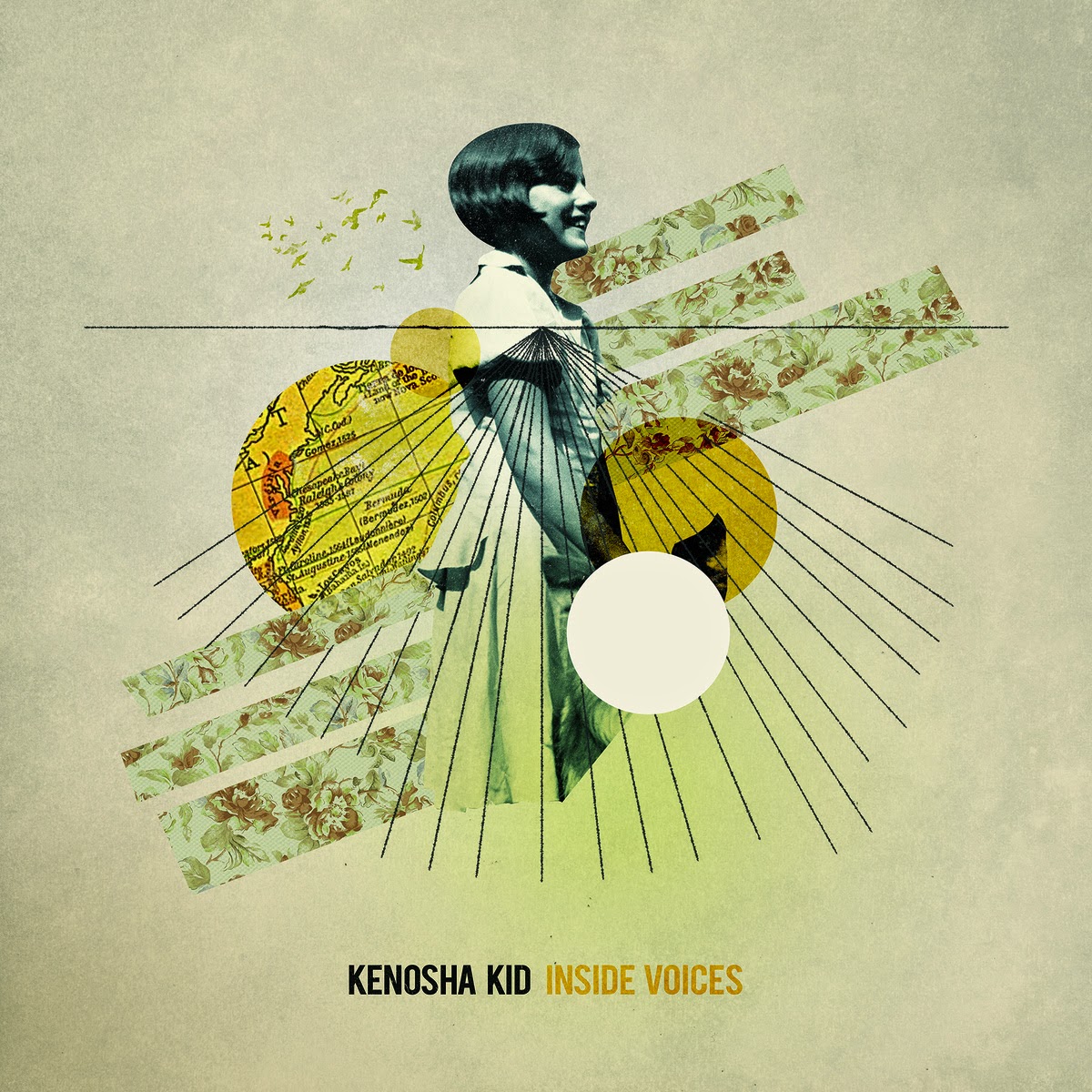 With plenty of heart and some wry smiles, Kenosha Kid's newest album Inside Voices is dense with smoldering intensity and musicianship at the apex of instrumental/experimental jazz (or post-rock or whatever genre peg you prefer to hammer home).  Recently self-released on 12" vinyl and digital, guitarist-composer-arranger Dan Nettles helms another inventive outing as Kenosha Kid based in Athens, GA. Joined by an international crew of horn players, tonight is the album release party at Hendershot's, sets at 8:30 & 10:00, as part of the music/electronic art/tech Slingshot Festival.

Wrapping up side A is the gorgeous, slow burning "Liberty Bell", a reverent anthem rife with deeply soulful guitar work accompanied by lush tenor saxophone from Greg Sinibaldi and superbly restrained drumming.

On "Map of the Universe" Handley lays back on bass, reigning in pent up energy from repeated horn rhythms, giving the tune a sense of steady pull, like hauling in an ancient vessel, hand over hand, slowly inching toward the longshore. Patton's shuffling drums engender a blend of drive with a soft touch.  Nettles' guitar takes turns with saxophone soaring over the groove as feet become inches until contact.  This is perhaps the album's best simmering mix of careful arrangement and wild improvisation.

Inside Voices has been in the works for two years, explains Nettles: six to eight months writing and arranging, another year fleshing out the songs through live performance, and finally a week-long residency at Hendershot's Coffee Bar paired with concurrent studio time at Studio 1093, just blocks from Nettles' home.  Getting everyone together in Athens was a challenge, but ringleader Nettles says he's "thankful to have a pool of great musicians who know my songs".  Once assembled, the project coalesced between nightly on-stage experimentations and daily recording sessions, essentially the distillations of the prior evening's flashes of inspiration.  "It takes a little more spice to keep my ears on board," adds Nettles.  The album and Kenosha Kid's live shows are always exhilarating as a result.

The vinyl release is adorned with some very special photographs, graphically incorporated with style by Ryan White.  Nettles' grandmother cheerfully graces the cover. His aunt, Bea Nettles, is the source of the timeless negatives used on the album; she's well-known in fine art circles for her photography, especially her tarot card series.  Aesthetic sophistication evidently runs in the family.

The B side feels looser like the group has found a cruising trajectory.  The horns add creepy levity to the 60's throwback vibe of "Zombie Party"; Patton's landslide drum fills tumble like gore strewn across varsity sweaters. "Mushmouth" swings with funk guitar, sending the listener on something like a Chips-era highway chase; later, an all-too-brief bass solo from Handley is punctuated by joyful horn hits and more Meters'-style guitar from Nettles. Patton's bass drum is propulsive and his intro on "Everyone I Know" displays his mastery of the instrument with fully-automatic, hair-trigger sensitivity as the band rises to a fever.

Clearly Nettles, Patton and bassist Robby Handley possess the sort of self-described "telepathic" musical relationship which constitutes the essential heart of Kenosha Kid.  To see their live performance as a trio is to witness the finest in creative collaboration; they also genuinely seem to have a great time playing together.  Inside Voices is the boiled down essence of more than a decade of musical partnership.  The final package is clean but not clinical, with an emphasis on ensemble playing, approachable melodies, and spontaneity with dashes of electronic effects to enliven the senses.