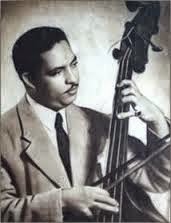 Israel "Cachao" Lopez is often lauded as the creator of Mambo, which then led to the advent of Salsa music. More broadly, he is respected as the greatest bassist in modern Cuban musical history.  Over six decades his innovations on the instrument and his participation in countless groups have made him a giant who has spread the Cuban sound out of the Caribbean and into the mainstream.

I came upon Cachao and his musical legacy via the actor (and avid percussionist) Andy Garcia in a documentary entitled Cachao: Uno Más, currently on PBS's American Masters. Discussed in the film, the recording above is a version of Lopez's seminal cut called "Chanchullo", originally titled "Rareza de Melitón" in 1937,  and clearly the source for Tito Puente's "Oye Como Va" later popularized by Carlos Santana. Below is the film's synapsis from PBS:


The Grammy-winning bassist Israel “Cachao” Lopez died in Coral Gables, Florida in March 2008, almost 90-years old. A maestro of legendary status on the world stage and ultimately considered one of the greatest Afro-Cuban musicians of all time, he had made his home in the United States for the past four decades. Coming from a family of classical musicians, he had formal conservatory training and held a seat in the Havana Philharmonic Orchestra for 30 years, performing under the direction of all of the legendary international conductors of the time – beginning at age 10! American Masters pays tribute to the Father of Mambo in the series’ bilingual film, Cachao: Uno Más premiering Monday, September 20, 2010... The film is produced, narrated and illuminated by the actor Andy Garcia, a close friend and ardent fan, who helped re-establish Cachao’s career in the ‘90s. Among the film’s many treats is Garcia playing the bongos with Cachao.


Here's one of Cachao's first American releases--can't wait to hear it!