Living in 'The Spectacular Now'

For an indie with a limited budget, The Spectacular Now received wider than expected exposure due to solid writing and some fine acting, especially from relative newcomer Shailene Woodley.  A glowing reception at Sundance surely helped.  Overall, it's an entertaining film with a hazy patina of teenage angst rife with nebulous ambitions. The protagonists' respective futures are further blurred by questionable coping strategies and a requisite lack of role models. Honestly, there are no definitive happy endings here but neither is it a complete downer.

Although coming-of-age stories are overplayed today (and this one has a bit too much nonchalant underage drinking), the plot here takes a novel route through familiar themes: finding identity in a confusing world, relating to one another when we can, and admitting that our parents' lives are not necessarily ours to repeat.

I related to the Southeastern setting, Athens, GA to be exact, a midsize town like any other, somewhat depressed with kudzu-covered outskirts. Behind my pup Tallulah is the character Aimee's house from the film, just around the corner from our spot in leafy Normaltown.  For me, even better than the humble low-slung rental itself is the real life neighbors' nifty micro-clearinghouse for miscellanea. 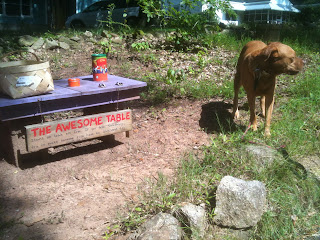 I've picked up many a cool little item from The Awesome Table (and re-gifted as directed): flowerpots, posters, antiques bottles, all manner of useful detritus--useful to someone, at least.  The Spectacular Now has its utility, too, while taking itself just seriously enough for the viewer to follow suit.

Watch the trailer.
More on the director, James Ponsoldt, an Athens, GA native.
Posted by a.f.c.tank at 7:06 PM

Email ThisBlogThis!Share to TwitterShare to FacebookShare to Pinterest
Labels: cinema, I love my dog, review, snapshots