Mad Men revealed the sexy side of advertising amidst the swinging cultural/consumerist evolution of the early-to-mid-60's. With more historical focus, NO illuminates the significant social impact of a marketing campaign when political momentum needs shifting. 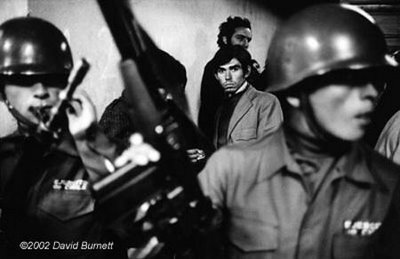 Set in Santiago and the California-like coast of Chile, NO portrays the life of creatives--led by Gael Garcia Bernal as real life ad-man René Saavedra--with a steady throughline to the BS that is PR and buzzbuilding. Angles converge at the forefront of a change movement to bring back true democracy in a country paralyzed by the oppression and fear-mongering of General Augusto Pinochet's authoritarian regime. In moviemaking terms, the era is the star; director Pablo Larraín deploys every tacky 80's t-shirt and tennis shoe, every pastel storefront, every classic Toyota and VW to achieve a convincing feel. 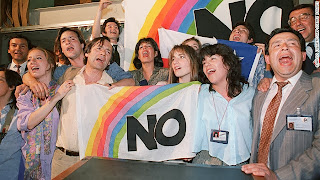 The Southern Cone is, today, one massive legacy of liberty and perseverance triumphing over a minority of powerdrunk agents of corruption and violence; many South American societies have the vibrant economies and growing middle classes to prove it, yet a healthy skepticism for elected officials prevails. No doubt Chileans will be offended by my oversimplification of the remarkable phase of socio-political change represented in NO (At least I studied Latin American life under military dictatorships in college). You should probably just find an outlet to watch this one, with all its lo-fi videotaped scenes seamlessly spliced into archived amateur footage, fine casting, and straightforward screenwriting; the result is solidly entertaining and informative.

Still not convinced? ~ NY Times "One Prism on the Undoing of Pinochet"

Closer to home, public policy guru Robert Reich is hoping Americans will join him in a campaign to address the scourge that is economic inequality in the US.  Who will be his Rene Saavedra?
Reich's film to spearhead the movement ~ Inequality for All
Posted by a.f.c.tank at 5:16 PM