For a series of evenings in the winter & spring of 2010, Kenosha Kid took up residency at the Flicker Theatre in downtown Athens, GA and the result is a wildly varied, deeply grooved and finely blitzed collection of live cuts called Land of Obey out on Nowt Records. 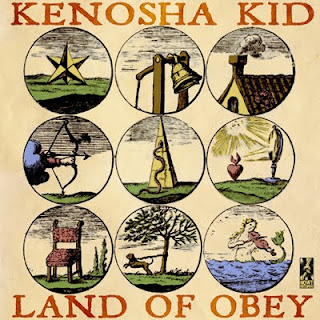 There, property taxes are fair, rents are reasonable if you choose to play by the rules which Kenosha Kid rarely do. Instead, guitarist Dan Nettles, bassist Neal Fountain, and drummer Marlon Patton take liberties and own each theme, each variation, each breakdown because they've built it brick by brick, phrase by phrase to deliciously seamless effect.

To open, 'Fanfare' flings listeners into a gorgeous landscape with an arpeggio in the vein of Zappa's 'Adventures of Gregory Peccary' and from then on the vistas are serene and spacious. You feel you're in for something vast, something beyond definition, beyond the limitations of genre or label. The listener is fully primed to slide comfortably into a bluesy, ash-tinged groove.

The next track, 'Muddy Waters', is like a couple sitting over a plate of catfish with a bayou steam rising all around. At first, diners pick out the bones, isolating morsels to share, but soon enough their real intentions begin to pile up. The lovers glance at one another less and less and devour the flesh more and more until what's left is a heap of a memorable carcass and a slow burning, blues-induced fog around the gut and the head. It's not straight blues -- maybe Lightnin' Hopkins tripped over Duke Ellington's cane -- but it is one of the album's best examples of Kenosha Kid's refined handling of myriad influences.

'Out the Window' is an atmospheric journey over sand and space. The 'window' might be the door of a saharan Tuareg dwelling, tanned goatskins flapping in an arid but welcome breeze. Like a contented nomad, bassist Fountain pulls but not too forcefully, instead preferring to tug the ropes from the middle of the pack like a tuneful Jaco Pastorius without the fatal chip on the shoulder. There's no hurry. From Patton, a shimmering oasis of cymbals ripples on the horizon, receding ever, arriving never. The whole shifting thing swirls shadow and smoke with glinting stars above.

'Take What You Want' features the warmest of Nettles' guitar themes, with its subtle country lilt as a tambourine keeps time in an Aquarian throwback. It's all nostalgia and echo and occasional goosebumps at the memory flood, like golden light through a pinhole camera.

Other tunes find guitarist Dan Nettles clawing his way up a ragged mountain range even as the scree underneath starts an undeniable avalanche. The trio tumble end over end in slow motion and somehow, out of thin air, find extemporaneous footholds. Soon it's the mountain itself that stretches under the centrifugal force with Nettles, Fountain, and Patton standing firmly at the center of an unearthly orbit. This is not easy music to make live. It's organic chemistry and the students have become the professors: swirling guitar peels, profound bass hues, with alternatingly austere yet firm beats punctuating a disitnctly cinematic set of compositions. 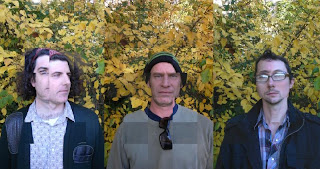 Neal Fountain consistently offers deep, chorded bass foundations massaging the fretboard with tenderness to see what stresses sublimate into the atmosphere, that is, when he's not subtly funking things up. He and Nettles seem joined by a lobe as they share the residence of melody and craftily structured harmonies, always spontaneous yet fitting. Patton's drumming is at once immpecably tight and full of quiet personality. Cymbal flourishes, striding hi-hat and snare, and speed metal toms and bass drum combos make a sturdy framework for the others' lyrical musings.

The album's cover paints little circular windows into the heads of these innovative musicians, sonic construction workers who rely upon very few fandangled materials; except for Dan Nettles' effortlessly layered loops, the building blocks are the same that Wes Montgomery used, the same as Max Roach or Bill Frisell or Mingus. Ample stage time, too, has done Kenosha Kid and their listeners an epic service: superb communication, generosity, skill and joy blend together then emerge as the transcendental Land of Obey. Find your own path there -- they've flung the gate wide open!

Nowtrecords.org - Listen . Explore . Expand your scope.
Posted by a.f.c.tank at 8:19 AM