It's been many years since I've actually sat down and tried to draw something, let alone make a print of it. Lately, I've been studying up on viscosity printing (a method of simultaneously including many hues on a print in one pass through the press) while lingering over some of the old ukiyo-e prints that inspired me during college. My old printmaking instructor at Northern Michigan University had such a laidback, supportive style and he used to encourage us to find influences and expand our own styles. I had some success with intaglio printing but really only began to get into the process by the time my coursework was complete.

These are some beautiful examples of the kind of prints that can be made through various processes including woodcut, lithography, intaglio, among others. This first is a portion of a traditional Japanese woodcut.

Peter Milton is one of the premier intaglio printers working today...the level of detail is matchless. Of course, there's Durer, the master.

Last up is an old intaglio print of my own...a rough one, at that! 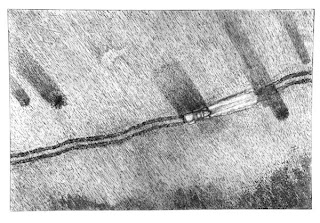 Email ThisBlogThis!Share to TwitterShare to FacebookShare to Pinterest
Labels: arte